The Summer Steam Sale is here, and with it comes a variety of deals seeking to empty wallets. I've personally managed to snag several games for $50. There's nothing in there that's particularly new, although I could review something if I really feel like I'm running low on new stuff to review. However, Steam itself has a new game I can review, and I'm going to review it, simply because I can. It's the deal-giving tower defense game Summer Saliens! 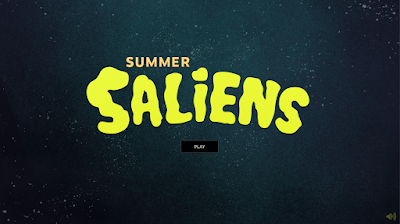 As the conclusion for my arbitrary Steam-free month, I'm looking at a game I saw among my Twitter replies/likes. It's also another game in development, like Super Lesbian Animal RPG, but this one is probably one no one's heard of yet. Of course, I'm saying that when I was just showing people an RPG with furry characters and strong LGBT themes (which now has a stat on save files for how many times Melody and Alison have kissed that file.) Today's game is the MOTHER-'em-up Circadian, by Jeff Brooks! (demo) (main website)

Preface: Well, E3 has come and gone, and while I had surprisingly little interest in it, I have to say something about it. Here's what I can remember:

Oh, and I know it's a bit late, but I want to do a joke about Detroit: Become Human and it's incredibly ham-handed handling of African American Civil Rights Movement symbols. Sing along to the tune of Centerfold, originally by the J. Geils Band, as sung by Captain Jack:

That was very dumb, and I'm sorry. But when I first thought of that joke watching a review for The Smurfs movie, I had to throw it out there eventually. On to the actual preview.
-----
Ladies, gentlemen, and everyone else, I've never really told anyone this, and I have no idea what kind of people you are, but I have a confession. You see, I'm not a merperson, I'm not an artist.

*Try Everything by Shakira starts playing*

A bit of a furry.
Why'd I wait till now to admit that I'd probably be a red rabbit? Partially it's because I have the art skills of your average elementary school kid, and most furries seem to have some really good art skills. Partially because I learned my cousin is also one and even makes fursuits, so I felt like I had someone in the community I could relate to. Either way, it's a opportune time to mention my furriness since I'm previewing what will likely be seen as a furry game today. It's the demo for Bobby Schroeder's Super Lesbian Animal RPG!
Read more »
Posted by Unknown at 5:51 AM No comments:

For those of you that saw the last post, I'm doing some games that don't require Steam for the rest of the month. I gave out some clues to the identity of the games, and the first one is here. And it's a meme game, so hope you're all fans of inside jokes and references to bootleg NES games! If you're not, too bad! It's the side-scrolling platformer Grand Dad Reboot, by 'RED-FIRE' on Game Jolt!

'Grand Dad' is the unofficial name of a bootleg character of the character above: a bizarre mix of animated caveman Fred Flintstone and Mario. According to the game's intro (rendered in glorious bootleg Engrish,) he's one of many bootleg creatures looking to take over Earth. They come not from China, not from Russia, not from Vietnam, but from space! However, our caveplumber has rebelled against his own kind and now must fight against them and their copyright-infringing terror in order to save humanity!

Hello, everyone. I was planning on reviewing Cultist Simulator, a card game by Fallen London alumni that caught my attention recently. However, something bigger has caught my attention: Steam/Valve doing something extremely stupid. You've probably heard about how recently Steam has had some trouble with some adult-oriented anime visual novels (shamelessly self-promoting my writing!) as well as a game basically about being a school shooter, a touchy subject in the only country where this is a big problem. Steam's solution? Throw their hands in the air and say "Fine! If you don't like how we curate, we'll just open the floodgates!"
It's actions like this that make me pretend to take a sullen drink from a beer and reminisce about the time a game like Bad Rats was an anomaly among actually decent games. Steam's policy now is anything goes, unless it's illegal (does it consider each country's laws? Would Night in the Woods be illegal in Saudi Arabia for having a gay couple?), "straight up trolling" (whatever that incredibly ambiguous definition means,) and doesn't meet their standards of quality.

Seriously, I had no idea they had standards of quality.
Read more »
Posted by Unknown at 4:12 PM No comments: